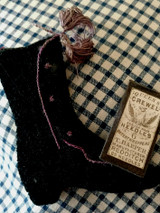 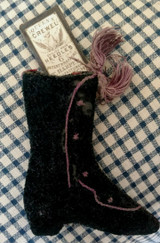 Here is a charming Victorian Edwardian sewing needle case which would appeal to the vintage sewing collector.  The plush case is made in a likeness  of  a woman's high button shoe.

It is open on the top for storing a package of needles.  The hand made case is black velvet, trimmed with purple thread.  This thread outlines the shape of the shoe.   A tassel at the top adds an extra touch.  The shoe "buttons" are also embroidered with the purple thread.   Only the front of the shoe is decorated.

The package of needles are made by T. Harper, English made crewel needles.   Some needles still remain in the packet.

Condition:  The purple thread is partially detached, near the top of the shoe to the point of the scallop.  The thread appears just to have been glued so would need a little attention to fix.   I believe, too, this same thread may have finished the top edge of the shoe, as a decoration, but, for the most part, is gone.