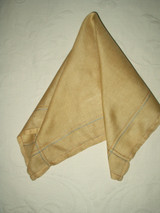 The Gatherings is offering a nice pongee or raw silk handkerchief from the early part of the 20th century. It was during the 1920's or 1930's, these type of hankies were imported to the U.S. market  from China or Japan.

In a natural shade of tan or ecru, three rows of drawn thread were pulled, one at the edge and other two 1-1/2" in from the edge.  After the threads were pulled, a colored thread or threads were painstaking pulled or woven through.  A skilled work of a needle.

Pongee is a washing silk, so this one has been freshly laundered.  Used but nice condition with only a few stitches on the inside hem line broken.