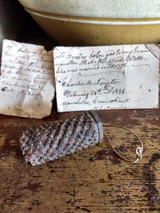 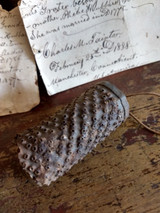 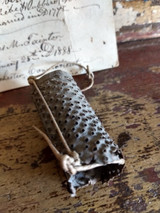 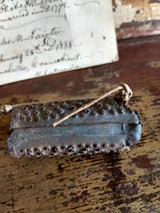 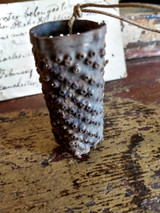 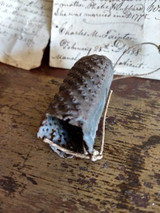 Although this nutmeg grater is not fancy, being of the plain sort, it was indeed endearing.  It was so endearing that it was passed from several generations.    From the last part of the 18th Century to a grandson in the late 19th century, the grater was held in esteem.

The grandson documented his grandmother as Phebe Hubbard Wells of Middletown, who was married in 1778 and died in 1786.

The small grater is a cylinder style, made of tin and hand punched.  Seamed on one side with a fold over top.  I would assume the bottom was made the same but has deteriorated.  It is 2" in length x 7/8" in diameter, across the top.  An old string has been looped through the cylinder and tied to hang. String is old but I doubt as early as the grater.