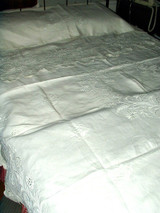 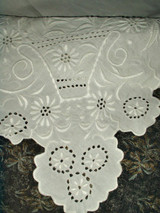 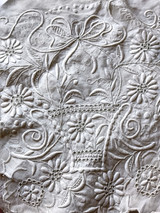 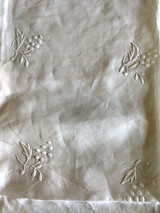 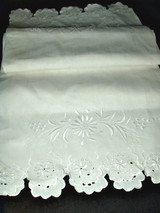 Overall the length of the spread is 108" long, however, 22" of this length would include the fold over return which would be at the headboard. So 96" long would be the actual measurement you would be working with.  Hope this makes sense.

Completely around the four sides is a deeply scallop border.  Just the scallops are 4" deep, but with it are trails of vine and flowers making the entire border 12" wide..    As you notice from photo there is a large flower basket worked in each of the four corners of the spread.  The baskets sit on an angle with each of the basket, themselves, 14" tall.

At the center of the spread a circular motif, 26" in diameter, filled with the same style of flowers and vines. As you notice, between the border and the circular motif are embroidered berries or buds.  A double row of this particular motif is embroidered near the bottom of the cover at the one end.  The other three sides are a single row of berries.

Condition of the spread is nice.  I am sure it has been used but little. Sometime it has been laundered but not recently.

The bolster sham is made in the same style pattern as the spread, but on a smaller scale.  It is seamed on the two longer sides and open on both shorter ends.  It is 61-1/2" long x 17" wide.  It has not been recently laundered as the spread has.

The small square layover sham or perhaps it was a doily for a side table.  Again the same lovely motif.  It is 25" square.  Has not been recently laundered and does have a bit of oxidation.

The fabric is linen.  All, in my opinion should be laundered.

Home sewn and embroidered.  Would fit a standard size bed.